A missing child. A desperate mother. And a house full of secrets.

Two years ago, Julia lost her family in a tragic accident. Her husband drowned trying to save their daughter, Lily, in the river near their rural home. But the little girl’s body was never found—and Julia believes Lily is somehow still alive.

Alone and broke, Julia opens her house as a writers’ retreat. One of the first guests is Lucas, a horror novelist, who becomes obsessed with finding out what happened to Lily. But within days of his arrival, the peace of the retreat is shattered by a series of eerie events.

When Lucas’s investigation leads him and Julia into the woods, they discover a dark secret—a secret that someone will do anything to protect…

What really happened that day by the river? Why was Lily never found? And who, or what, is haunting the retreat?

Mysterious, griping and soooo creepy. From the first chapter I couldn’t think of anything else, just that I need to read it until it’s finished. It was really fast pacing, so many things happened in this book, so many revelations. It’s very well written, it felt like I was watching a film rather than reading a book. I love Mark Edwards’ writing style and he always manages to pull me right into the story, there were parts I was as scared as the writers in their cottage, as skeptical as Lucas over The Widow existence, feeling Julia’s grief, the perfect example how book should be written so you can connect to all characters without even trying.

The plot was unique, it wasn’t only about disappearance of little girl, there was so much more happening in this village, so many secrets tangled between families, folk story that will make you believe just anything, even if you are not superstitious because some things are just too hard to make up, so they must be true surely?

Getting to ending of the book, I’ve run out of all possible explanations, I blamed probably everyone by that point and then it all came… Twist after twist, more things coming out, more revelations and I’m not ashamed to admit it, I’m sure I’m not alone but all my suspicions were completely wrong.

Overall feelings now: I’m sad it’s over, but I couldn’t read it any slower, it would be impossible! If I could, I would give it even 6 stars!

Mark Edwards has done it again and I believe this must be his best novel yet. I still have some of his books to read while I wait for another one to come out, which I hope won’t be too long. 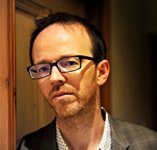 I write psychological thrillers. My influences include writers such as Stephen King, Ira Levin, Ruth Rendell, Ian McEwan, Val McDermid and Donna Tartt and movies like Rosemary’s Baby, Single White Female, Fatal Attraction and anything in which scary things happen to ordinary people.

I can’t recommend Mark Edwards’s books enough so check them out and treat yourself, they are worth it:

7 thoughts on “Book Review: The Retreat by MARK EDWARDS”