It was the happiest day of her life. Little did she know it was also the last.

When a woman’s body is found in the grounds of a ruined priory, Detective Imogen Evans realises she is dealing with a serial killer—a killer whose victims appear to die in a state of bliss, eyes open, smiles forever frozen on their faces.

A few miles away, single dad Ben Hofland believes his fortunes are changing at last. Forced to move back to the sleepy village where he grew up following the breakdown of his marriage, Ben finally finds work. What’s more, the bullies who have been terrorising his son, Ollie, disappear. For the first time in months, Ben feels lucky.

But he is unaware that someone is watching him and Ollie. Someone who wants nothing but happiness for Ben.

I managed to get my hands on this great thriller few days go. Newly published, it ranked really high on Amazon and I’ve decided to get a Kindle version of it straight away.

Thrillers being my favourite genre, I’ve read fair amount of them and unfortunately many of them became easily forgotten over time or tend to have similar plots and twists. What an amazing surprise was to come across this one, great and unique plot and every chapter packed with excitement. REAL PAGE TURNER.

The Lucky Ones is the first book I read written by Mark Edwards and I can’t believe I’ve never read any other ones.

The book si written from different POVs and characters and their lifes are very believable. Ben quickly became my favourite character and I was really worried about him. He seemed like a person who needs his life to get better and that made me instantly extremely concerned about him and his son.

I tend to enjoy and love Killer’s POVs in any thriller and reading the thoughts of killer who wants his victims to die happy, was very interesting.

Although some things I could guess and work out myself, author still managed to keep me excited and surprise me with lots of twists and turns. Final just left me staring at the screen, not believing it’s over and what just happened?? Just genius!

I would recommend this book to any thriller lover and I can guarantee you won’t be disappointed.

It was easy 5 star review given to this novel and I can’t wait to read all the other ones written by Mark Edwards, which I’ve already purchased on Kindle. Exciting reading nights ahead of me and more reviews to follow. 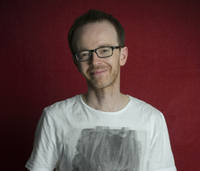 I write psychological thrillers. My influences include writers such as Stephen King, Ira Levin, Ruth Rendell, Ian McEwan, Val McDermid and Donna Tartt and movies like Rosemary’s Baby, Single White Female, Fatal Attraction and anything in which scary things happen to ordinary people.

The Lucky Ones by Mark Edwards can be purchased here.